I spoke with Refract Studios about their work on Distance, a spiritual successor to their previous game Nitronic Rush. Not only did I discover how they developed the futuristic tracks and vehicles, but also how the soundtrack of Distance ties into the fast, neon fused gameplay of their racing game. 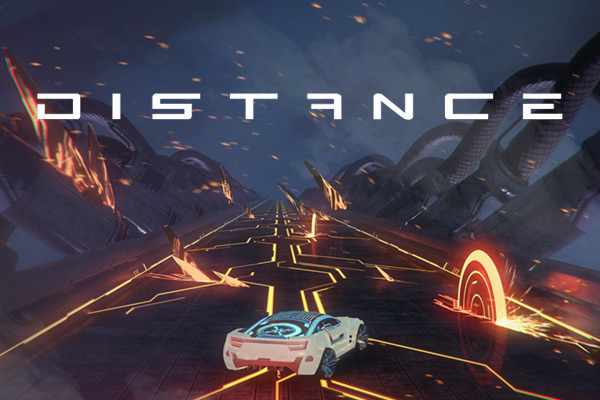 Hi, my name is Jordan Hemenway and I’m one of the co-founders of Refract. Over the past 5+ years of working on Distance, I’ve touched nearly every aspect of the game’s development (like many of us here). But these days my focus is mostly on stuff like story/level design, game logic, audio, and business development.

Before creating Distance our team had developed a student game called Nitronic Rush which was essentially a love letter to 90s arcade racing games. Visually it was inspired by an 80s view of the future, which from our perspective meant neon-drenched and over-the-top in every way. Distance is a spiritual successor to Nitronic Rush, so it was fairly natural to pursue a similar visual style.

This time, however, we wanted to bring in a wider range of influences and attempt to establish a darker, more mysterious world. We also wanted it to feel a bit more grounded with a proper use of lighting and shading. In Nitronic Rush, many of the textures only looked good in a nighttime setting, but when you bring in sunlight things started looking rough. We wanted to simultaneously achieve the over-the-top neon visuals while still having an option to entirely disable them if desired. At the end of the day we ended up with a similar futuristic fantasy style, but it’s vastly more flexible compared to what we had in Nitronic Rush.

Nitronic Rush is our number one inspiration for the base art style of Distance, or more the process of making Nitronic Rush inspired the artistic decisions we made going into Distance. As development has gone on, we’re continually finding new and interesting ways to utilize assets when experimenting with mood and tone. Specifically, artistic elements of sci-fi and horror have found their way into the most recent incarnation of Adventure mode.

Each dev on the team has their own inspirations, but for me, haunting, surreal takes on sci-fi and horror are what frequently fuel my artistic creations. While many of our assets weren’t originally intended for those genres, manipulating the lighting and audio around them can yield some really engaging results.

Building and maintaining the art style

Instead of building each level as a large unmodifiable scene, we build everything modularly in our editor. From there it’s all about ensuring that materials, overarching colors, and object placements all have a certain level of consistency (at least in Adventure mode). We want to encourage as much creativity as possible so there aren’t too many hard and fast rules, but using consistent colors and clean track layouts help to ensure each level properly fits into the big picture.

Both color and shapes are certainly important to get right, mostly because the world is blasting past you so quickly that it can be difficult to convey critical info. Specifically, obstacles, ramps, and other objects the car interact with need to be extremely clear from long ways away. There isn’t an extreme amount of time put into creating the most unique color palettes or silhouettes, but we do spend some time on those elements if clarity of that object is a critical part of the gameplay. 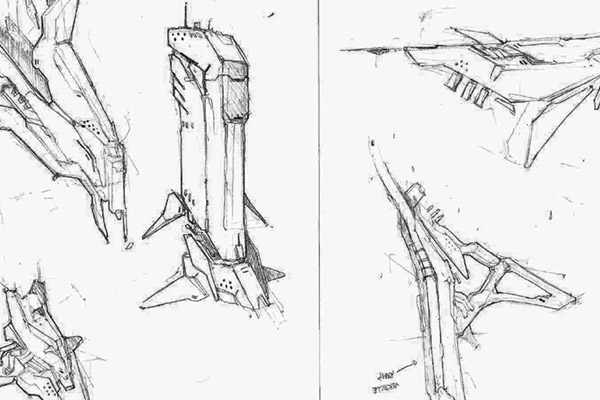 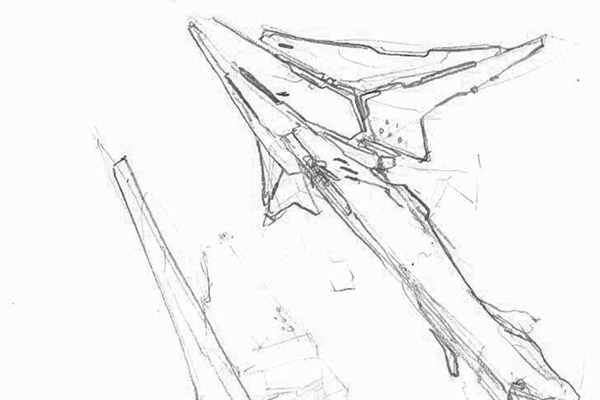 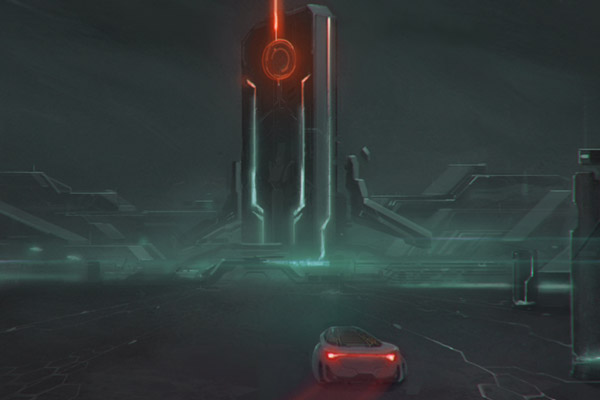 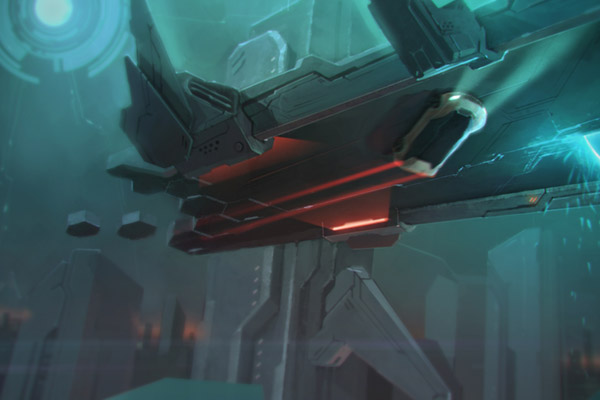 I don’t think there are any super specific inspirations for the vehicles in Distance. According to Jason Nollan (our primary vehicle designer), each vehicle essentially starts by exploring a simple idea and then expanding the vehicle around it. For example, the primary car you drive in Distance started from exploring the idea of one long headlight on the front.

The primary limitation of our vehicle designs is that they must support the concepts of flight, boost, jump, rotation, as well as supporting all necessary HUD on the back of the car. Those limitations can be quite constricting, but having those in place certainly help to ensure every car feels like it makes sense in our particular universe.

Scrapped ideas and iterating upon an art style

The overarching neon style has remained constant from day one, but how it’s been used has actually changed quite a bit year by year. At first, we weren’t pushing our colors enough and players complained that it was hard to remember which level is which since they all look the same. That encouraged us to pursue much stronger saturated color palettes and strong ambient light so that each level stood out more. We stuck with that style for quite a while until we realized that a strongly saturated ambient light should be replaced with proper environment lighting. Otherwise, most of the things we’ve scrapped were simply due to story ideas not panning out and those particular objects not feeling correct within the context of the story.

Each person has their own process, but the most part it’s extremely collaborative. Some (like myself) are more skilled at visual-side of track design, and others are incredibly talented at creating tracks with fun, inventive gameplay. I know for some creating a rough outline on paper is extremely helpful. For me, it’s all about just getting in the editor and messing around. Of course, there’s an almost endless supply of possibilities with our editor, so going in with an intended theme or simple goal can be helpful in getting started.

Usually, our process is that someone creates their level, and as soon as possible uploads a playable version for the rest of the team. After receiving some feedback they either work on improvements themselves or pass it to a teammate.

Most of our decisions on track design are based on feel, so each designer had to find for themselves what’s engaging and factor in feedback as necessary. The only major guiding principle I can think of is related to inadvertently creating shortcuts. All of our tracks are all point A to B, and your car has the ability to fly, wall-ride, etc. That means that if you don’t continually build away from the start point players might find a cheap shortcut to reach the end. Perhaps that possibility is intended by the designer, but it’s something to watch for when starting out.

In Adventure mode, we have a certain story flow we aim to achieve, so those tracks will be the most cohesive and thematic. Outside of Adventure mode (a.k.a. Arcade mode), anything is possible. We were initially aiming to have all of the Arcade tracks match a certain theme, but as Adventure mode came into focus as a cohesive package it seemed perfectly acceptable to let Arcade tracks push the boundaries and try out the crazier ideas.

After releasing Nitronic Rush we noticed that several players in our community had found a way to unlock the hidden editor we used to create the game. The editor was really rough and just functional enough for us to use it, but it blew our minds that players outside of the team were creating stuff. A year later many of the community created levels were as impressive as our creations, so we decided to include them in the build that’s now available for everyone to download.

Going into Distance we thought it would be great to continue allowing this creativity, especially with the possibility of including support for something like Steam Workshop. Fast forward five years I think supporting the level editor has ended up being the most time-consuming part of development, but still completely worth it to see the unbelievable creations uploaded onto Workshop. Over 2,100 levels have already been uploaded and we’re not even out of Early Access yet. 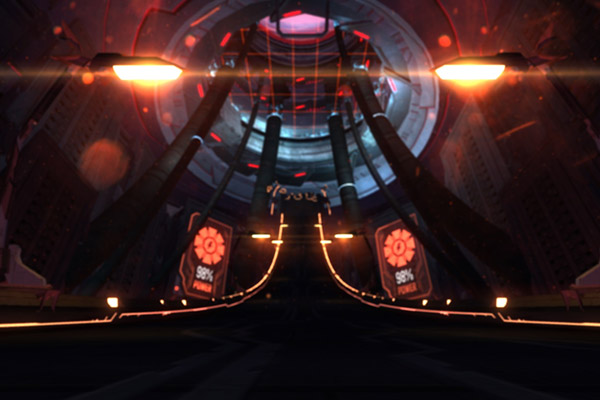 Most of the experiments that were entirely thrown out were related to teaching the car’s controls. Not only have we simplified the controls through development, but we also have found more clever ways to teach certain controls. Otherwise, there are plenty levels currently sitting on the cutting room floor, but it’s very possible that bits and pieces of them will sneak their way back into level content before the game is shipped.

It’s really hard to pick, but right now I’d say the final level of Adventure mode is potentially my favorite. Unfortunately, I can’t say more without spoiling the conclusion to the Adventure, but it’s a pretty wild experience.

Right off the bat, I should mention that I was the lead composer of Nitronic Rush and am currently working on Distance’s soundtrack. At this point Distance’s soundtrack is quite a bit different from Nitronic Rush’s soundtrack mostly due to a tone shift from the original game. In Nitronic Rush I just created music I felt matched the visuals and I was trying to ride the line between modern electro music and a more 80s retro synth feel. In Distance, the music is much more motivated by the story and I’m constantly trying to find new ways in the music to reinforce themes presented by the narrative. While both reflect modern electronic music to some degree, I think that the focus in Distance’s soundtrack is less on just being generically “fun” and more about extending the emotional energy and atmosphere of the environment.

I work for cheap. Truthfully though I had a lot of things musically I wanted to explore in Distance and graciously my teammates have supported my experimentation throughout the entire process.

The progression of the soundtrack

Adventure mode sends you deeper and deeper into the heart of a dark and twisted city. To reflect that, the music goes through a similar transition from beginning to end. I do my best to make the transitions as musically satisfying as possible, though at its core I do want players to feel the weight of that progression as they press on.

My primary goal with the soundtrack (along with every aspect of the audio) is the complement the visuals and gameplay as best as I can. I’m probably not the best judge of the soundtrack, but as level content continually improves from my teammates I think we’re narrowing down what works thematically and what just makes you want to drive fast. Still a lot of work to do but I’m excited to hear what players think of the final product.

We thank Jordan Hemenway for talking about the development process on Distance.