Hey there! My name is Daniel Mihalik, and I’m the lead artist of Morning Men. I’ve worked at Pixel Federation for five years. I`ve cruised through several projects like TrainStation and Diggy’s Adventure. Later on, I moved to the R&D department. There we tried tinkering with several small prototypes, and one eventually became Morning Men.

Hi. I’m Lukas Nizky, and I’m the head of development at Morning Men. I’ve been at Pixel Federation for about seven years. I transitioned from a QA tester to an R&D guy. Creating prototypes for Morning Men came after that, and since then I`ve been fully committed to this project. Instead of a house, I took out a huge mortgage for comic books!

Daniel Mihalik: It comes straight out of love for comic books. Both Jean Giraud and Mike Mignola are fantastic; they’ve inspired me throughout my whole life as an artist. Others like Leinil Yu, Sergi Brosa or Sean Murphy, I hold them all very high and dearly. Each one is great, excelling at something different. One does perfect character designs; one uses amazing color palettes and dynamic compositions.

Each inspiration enriches your style. As a team, we received a chance to move on with the MM prototype to a regular production phase. At that time, I was the only artist on the team. I chose an art style which best suited me; comic style. I`m a huge fan of comics in general, and I’ve been creating short comic stories for about 10 years now.

Daniel Mihalik: There are some days of the block you mentioned, like nothing is working. It’s a lot of stress, especially with deadlines. However, I believe there’s no use pushing too hard. Learn to switch off, watch and study references or other artists’ work you admire. That’s worked for me so far.

The World of Morning Men

Lukas Nizky: As someone who is trying to create and develop games, through many iterations of the game design and story, you stumble upon new ideas which might be great if they’re implemented into the game. It requires a steady hand not to sway from the vision you created for the game, both regarding story and production.

Lukas Nizky: I wouldn’t call them objectives regarding goals or achievements. As a player, you enter this world and act as the main protagonist Luddite. It’s up to you how the story moves forward and how the world and its characters react to the decisions you make.

The Process: From basic descriptions to final concepts

Daniel Mihalik: Usually I start with a raw silhouette sketch. I use basic geometric shapes so early on I define the proportion of both face and the body of the character. Also, along with conversations with story writers and game designers, I start to throw in equipment, clothes, and weapons. Next, I move on to line-art, filling it with flat colors, applying shadow, brightness or glint and at the very end, there are textures for particular parts of the character. Final characters which were key for the story were done quickly. They were one of the several requirements for greenlighting the project within the company. 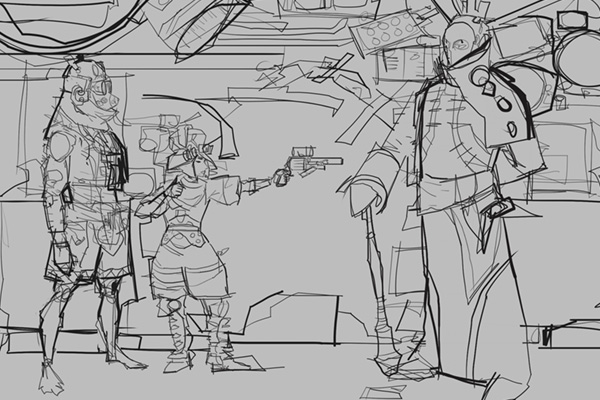 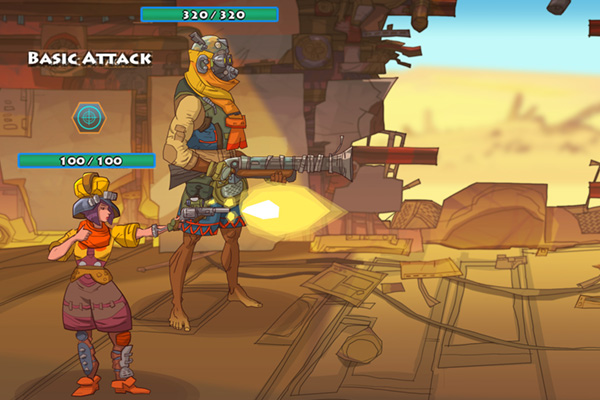 Daniel Mihalik: I feel each character should be his own, with a unique personality. I think about their life story, about those circumstances and life events which define that life; what clothes they wear and how they behave in that specific world. Each character needs its own time where you can play around with several ideas, but I usually trust the first idea. It’s usually the most honest and original.

I think we put a lot of our personal life into our characters. Subconsciously, you put your unique way of how you perceive life situations or even your personal character features. Many artists work like that 🙂

As we continue to develop the game and build the world of Morning Men. New ideas and facts arise every day which affects the characters and their design. Main characters have come a long way since I created them

Lukas Nizky: We started with the seed idea of what should be the message of the story. Morning Men is about trying to explore a not-to-distant future, where humanity yields its fate to AI. How drastically would that change the course of our destiny? Are we still going to be the ones steering the wheel? With that decided, creating and building the world with its characters was next.

We’re still trying to figure out what the end form of releasing this game should be. Being episodic was our first thought. We’ll see whether that will be the case or we’ll decide that this story and experience should have a proper compact and complete ending. There are many factors we’re still evaluating.

Lukas Nizky: Luddite is the main protagonist, so it’s a bit easier. With Jasper it’s different. His character is contained within this unknown piece of technology, forbidden within the walls of the Citadel. No one knows how he got there and as soon as Luddite gets her hands on him, her curiosity explodes. So, she and the player start to unveil this character together.

Lukas Nizky: Everywhere you look, you see limitations and obstacles. The same goes with creating a game. In trying to tell a story, there are several ways to excel at different things. As with other mediums, a movie, book or a comic/visual novel, they’re very distinctive. When you’re deciding what kind of story you want to tell, evaluate which medium provides the best suitable vessel for the story.

So, for example, in games you can let the player experience and play the whole thing; or let them see the whole thing. You can let them read it. Regarding our budget, we considered which approach was affordable and to what extent. It’s more like a combination of several methods for specific parts of our story.

Lukas Nizky: Morning Men is made in Unity. The artists and animators use Photoshop and Spine. The only interesting and different software used is our script tool. Our programmer has created a tool within Unity, so it can natively work with the game. Our story writers and game designers set up the scenes with assets, characters, music layers and sounds. Also, this is the place where the story is branched.

Thank you for giving us the opportunity to learn more about the development behind Morning Men.

We’re stoked to show you the full game. Hopefully, you’ll like it as much as we do. Take care.