My name is Onur Şamlı. Along with my brother Oral, we are responsible for anything related to general designs, artworks, writings, music, and sound design. In short, we are the creative directors of the game.

Conarium is a Lovecraftian thriller game that follows a suspenseful story about four scientists and their endeavor of passing beyond what we normally consider to be the “absolute” limits of nature. Their firm rational minds are questioned as they venture forth into the bowels of the Earth. 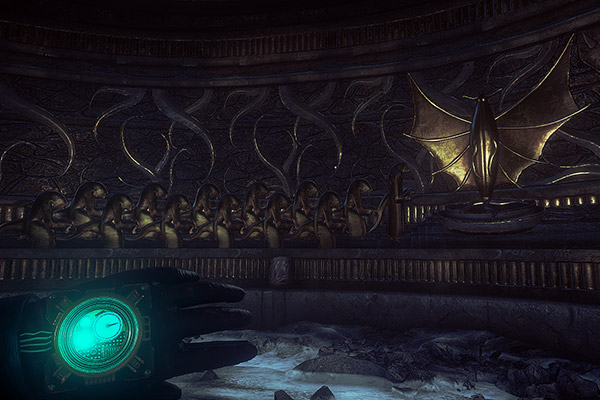 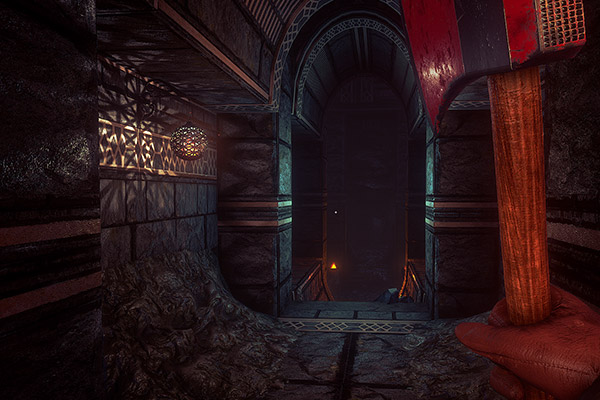 My brother and I are responsible for the story and all of the writing. At first, we tried doing it all together and it caused a lot of problems, affecting the development in a very negative way. So, my brother and I took the lead from then on.

From inspiration to an actual plot

I can say that the novella At The Mountains of Madness itself. The detail of narration and the masterly-crafted imaginative form of the story has always captivated us.

We collected lots of references to build a consistent world for the game such as Antarctic landscapes, ice caves, rock formations, interior designs and daily life in some of the Antarctic bases that are still being used. Other than that, we thoroughly researched some philosophical theories and world mythologies like the third eye to build some of the concepts we mainly used in the game.

At first, we thought of a plot as the story’s framework and then wrote the script. Also, creating a mind map helped us developing new ideas. After the script was done, we evaluated the overall integrity by asking crucial questions for eliminating any possible plot holes such as illogical or impossible events. After the evaluation process, we started working on the in-game texts and documents.

The first drafts were complete messes. Our first problem derived from our faulty attempt of writing the story as a team. That was one of the most troublesome events we encountered during the development. Then we took the matters into our own hands and corrected some parts. We recreated a few pieces of the story from scratch many times until we were satisfied with the results.

Telling the story and its challenges

Besides cut-scenes, in-game documents, and audio tapes, we use one extra form of telling the story which we call “Memory Fragments.” This can only be seen with the help of a device called Conarium, which is being carried by the player on his arm. As players progress, the device shows them what they are searching for by giving more clues, and this also reveals more of the story. 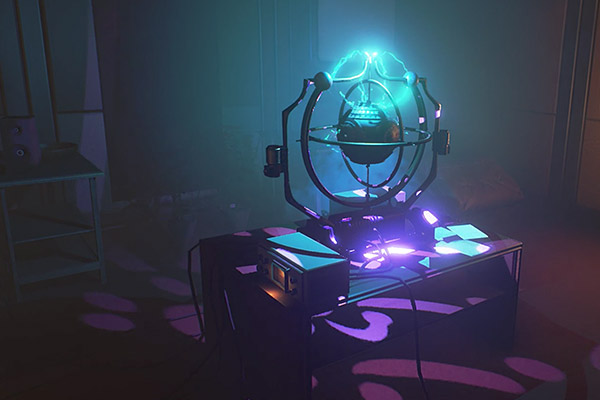 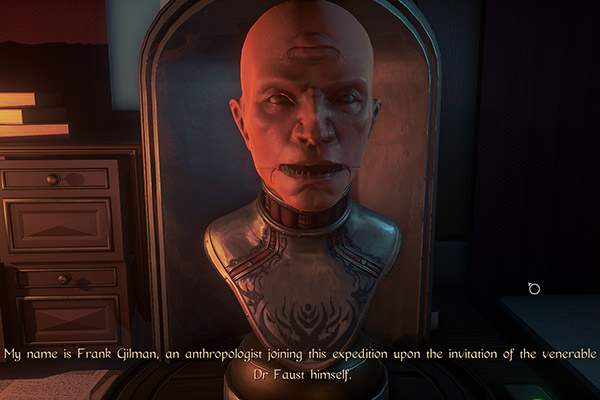 Unfortunately, there are restrictions and challenges. We’re a small indie team, we needed to be very conscious of the time we spent on each unique asset which we needed to build, whether this is a 3D object or a written piece of text. So, we needed to tailor and sometimes cut off some of the things to suit the restrictions we were bound to. Also, our intention from the start was to create a unique experience and not damage anything that H.P Lovecraft has already written. This is the most important design restriction for storytelling.

We built nearly everything we used in the game from scratch. To make the game aesthetically unique and self-tailored as what we intended to tell, we intentionally kept away from using ready-to-go stuff sold in various resources on the internet.

I can say that coming up with something mysterious and immersive as to let players want to follow it to the very end was the most challenging part of creating the story.

Players start in the cold and empty Antarctic base built near the South Pole and as the story progresses, lots of different environments become available for them to visit. This ranges from a Victorian styled mansion to the long-lost ruins, buried beneath the sands of Rub’ al Khali desert and catacombs, which lies under the surface of Antarctica built long before mankind trod on this planet.

References, whether they be movies, stories, images or songs, are what kept us motivated and ignited our imagination during the initial design process but without referring to the lore of the game all becomes inconsistent and out of place. So, we set some design pillars to follow and work accordingly. Of course, without making guidelines, it is really easy to get lost in the initial creation process. Before starting to build the actual assets for the environments, we had some rough ideas on how the overall stages should look like. Then we prepared some artwork to visualize the things a bit more, which would regulate the environment creation more easily.

We divided all the work between ourselves and tried to build things like character models, animations, level design, most of the sound design and composing of the musical tracks. This was really a demanding job and sometimes caused us to redo some of the things we’ve done, but it was required to maintain the look and feel of each environment as what we want them to be initially. The sound effects, lighting, weather effects, and visual glitches; we used all of those elements together to create a gripping experience for the player. It really would not be a gripping experience for players if we were to leave one out. Since we conceptualized the levels before creating them, there were no major technical issues or limitations in creating them. 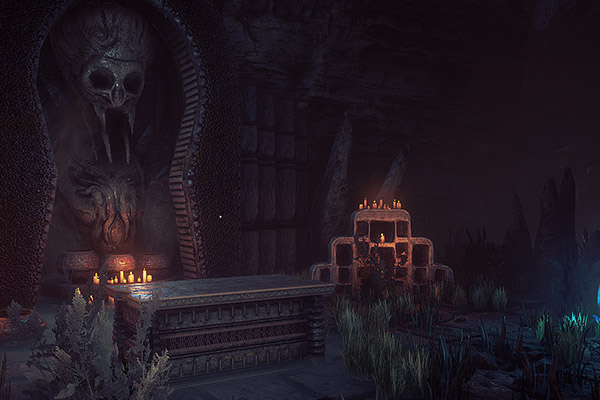 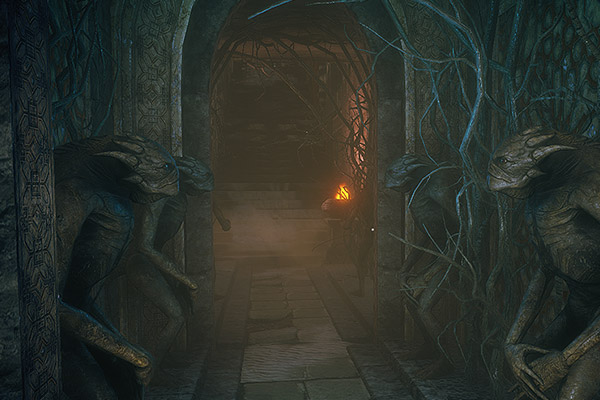 I particularly like the City Entrance level where the player first finds the ornamental object with a crystal in it.

We had tons of ideas in our minds but again being short on manpower made us realize we should better focus on the narrative rather than creature designs. Most importantly the main idea was making them look like they belong to the Lovecraftian lore. So, we mainly used aquatic and reptilian designs. As we did with the environment designs, we searched for numerous reference images of both aquatic and reptilian creatures and drew sketches to build the creatures in a believable way. Unfortunately, we scrapped a few ideas. For example, we had some aquatic life in the submerged part of the game that we had to remove because of some technical problems.

Firstly, we tried to conceptualize them by collecting references and prepared some artworks to start working on them in 3D. After the artwork creation phase, we created their models in our choice of 3D packages. When we were satisfied with the results, the texturing phase started. After many tests, we finalized the models and started animating them.

There is a guardian type of character that doesn’t harm the player but instead uses some environmental means to do so. We also have a shoggoth hiding within the ruins buried under the sands. And the reptilian mummies who are the creators of the pre-human city which the Antarctic base is built upon. Players mostly see the mummies sleeping in their eternal resting places. Other than these, there is a golem that was built by the reptilian race. 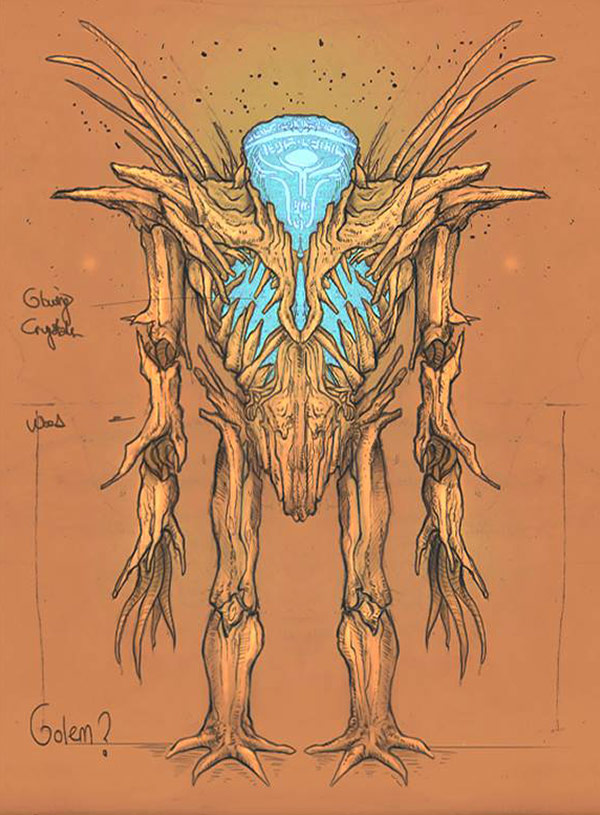 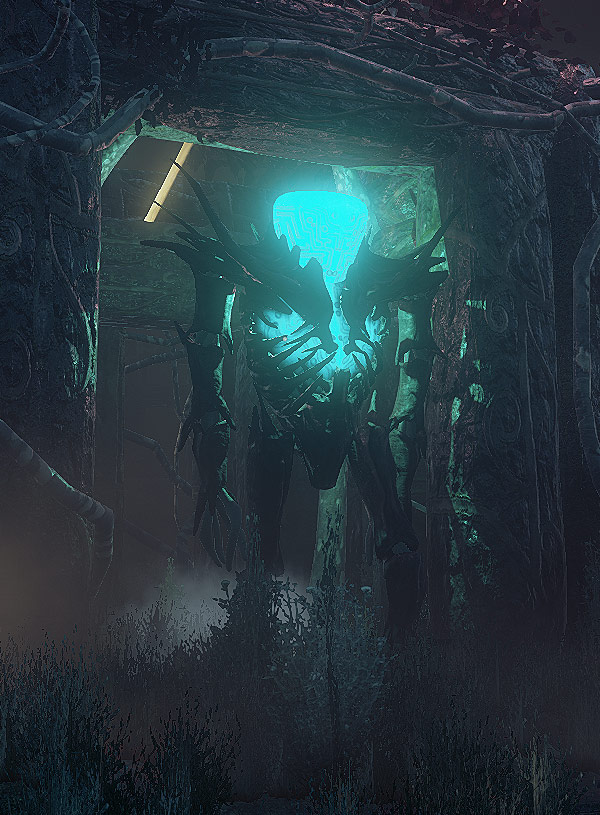 Guidelines and its challenges

The most important guideline to follow was making them look Lovecraftian. We did not want some random creatures or the things we see in our daily lives haunting players in their grotesque quest. So, we designed them to fit the story and the Lovecraftian setting we intended to make. Other than that, we wanted them to look like they belong to the environment they live in. Also, of course, they needed to look horrid.

There are too many disciplines to make a creature appealing such as designing, modeling, animating, and preparing the sounds it’d make and doing these right is where the challenge lies. For example, if a creature fails to act as how players think it would, things start to go awry. A creature in a horror game should seem scary and haunting and this depends from person to person, which makes it hard to come up with a decent idea.

There were lots of things we initially planned for the game but at the end of the day, because of some technical issues and the limitations of the development time, we had to exclude them. The most challenging part was being short on team members. It was not an easy feat to find the time to do all the things in a certain level of quality.

We thank Onur Şamlı for talking about the development process on Conarium.

Onur: We thank you for your interest in what we did with our project.