The Metronomicon and the Challenges of Making a Music RPG

Hi there! My name is Danny Garfield, and I am the designer and lead programmer on The Metronomicon. My little studio, Puuba, is responsible for the birth of this musical monstrosity.

The Metronomicon is, at its heart, a high-speed turn-based RPG, ala Final Fantasy VI. Once you build your party and combat starts, the musical track is divided into four lanes – one per hero. You, as the player, dive back and forth between these lanes, playing whichever notes you want, as suit your strategy. Need a cure? Jam over to the white mage and play some music. Enemy weak to fire? Head over to the black mage, and play the right sequence of notes. Every hero can equip multiple spells at a time, and the duration for which you streak in the hero’s lane is used to select between them!

The Role of Music in Combat

Every song in the game represents one corner of a deep rave/concert dungeon. The grand hall of a haunted castle, or the rooftop of a forest nightclub. Each song is choreographed into four tracks, and further into three difficulty levels which the player can choose from. Music acts as the lead motivator of all actions – sort of the turn clock for all heroes and enemies.

Furthermore, enemies can modify that standard note play in a number of ways. They can debuff you, making the notes waver or spin. They can send flaming notes down your track, which you must dodge around to catch. They can put land mines on the tracks.

The Metronomicon: Slay The Dance Floor has nine playable characters, each with six primary abilities, two optional secondaries, and a passive ability. These abilities range from attacks to cures to extremely nuanced and strategic buffs, debuffs, and situational attacks.

The parties you can build range from super aggressive to defensive/curative, and even to musically-empowered, taking stronger advantage of solid musical play.

Every hero derives from a classic RPG archetype to some degree. The warrior focuses on straight-forward damage. The black mage focuses on targeting elemental weaknesses to do increased damage, but which requires more attention. The berserker deals negative status effects onto his own party as he wails away on the enemies.

Some characters, like the druid, even have abilities that favor stronger note-based play. He can make all spells cost fewer notes to cast, and cause heroes to recover more quickly, allowing you to pour out attacks and damage – assuming you can keep up with the breakneck speed of having to move around. 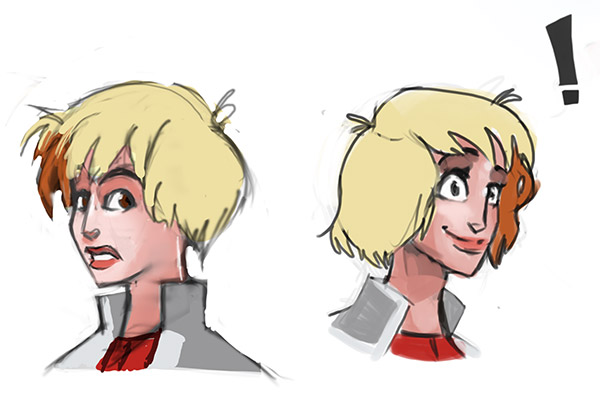 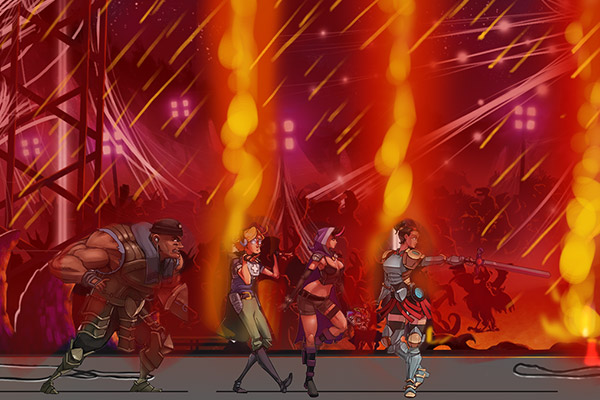 Every primary spell can be placed into one of three ability slots. In the first slot, abilities cost fewer notes to cast; they’re easier to get to and more consistent. In the last slot, they require more notes but get a considerable increase in power. This goes for all spells – buffs, cures, attacks, etc.

Let’s say you’re in the party yacht – our water-based dungeon. Enemies are typically weak to lightning. So, if you put lightning spells in your first tier, you can cast them more reliably. But, if you’re confident, putting them into a higher tier will result in much stronger critical strikes.

Gear can fall into a number of styles, straddling the RPG and musical worlds. If you’re more of an RPG fan, there is stat-driven gear: Strength, Magic, and Defense. These are the most obvious way to power your heroes up. However, if you have an eye for strategy, there are tons of items that, for example, do extra damage to bleeding enemies, or grant situational bonuses to your abilities. These might be preferred by an RPG fan.

If you’re all about that music, though, gear that empowers your heroes based on your current note streak or the accuracy of your note play – naturally all the more powerful on harder difficulties – might be the way to go. Of course, since both kills and notes are worth points, the rulers of the leaderboard are likely to fuse both strats together.

The Challenges of Combining Music and Combat

Oh man! I guess the first thing was trying to make space to make those strategic decisions. As much as I wanted a breakneck speed – sort of an infinite runner RPG, we needed to make sure that players could competently select the right spell – buff or elemental attack – as the situation presented itself. In mid-development, we realized that adding a grace period before counting note judgments was something we’d have to do.

Likewise, reinforcing and re-reinforcing the most important of combat feedback, which spell is queued and casting, most especially. I think I can count five ways we redundantly spell that out on screen.

I’d say that the rabbit hole of being able to pursue creative and synergistic ideas in both the RPG and rhythmic space was an issue too, as it so dramatically increased the scope of the game, but I really don’t regret that one bit.

All combat actions and clocks are based on beats that pass, rather than notes that you hit. As such, we were able to balance the complexity and difficulty of the combat without regard to which difficulty of choreography you select. Whether, over a few beats, you hit twenty crazy 24th notes, or just three taps, making the right decision will have the same effect.

And, while it’s true that those crazier tracks will supply more tracks to the normal leaderboards, side quests and arena challenges provide an opportunity to show off really high-end RPG play. Who can steal the most treasure? Do the most damage? Win the quickest? Only really synergistic and clever parties will pull that off, no matter how many notes there are.

Honestly, we just reached out to our favorite bands and asked nicely. At first, our plan was to do all of the music ourselves. We quickly realized that that was dumb. We’re making a music game because we love music! We should at least ask, right? We emailed people, we hit up genre subreddits, and we just generally made ourselves known. We ended up with an embarrassment of riches. We probably went through five-hundred tracks, able to pick our genuine favs.

The overarching musical need was more about feel than genre. I wanted songs that are musically complex, layered, and changing. Something that we could interestingly split into four concurrent tracks and give each a unique and independent feel.

Personally, Jimmy Urine is one of my favorite artists, and so I was stoked to get to work with him. He actually made an original song for the game. But, everyone we reached out to was a joy. Twitch peeps (Popskyy!); team favorites (Perturbator! Mega Ran! Dj Cutman!); newfound interwebs buds! Everyone was willing to trust us with their tracks, make edits, and even share updates about the game.

There is an interactive tutorial at the start of the game that explains all of the basics. But, moreover, I’d say that the first region, or at least half of it, serves as a slow onboarding process. At first, we give each hero just one or two abilities to choose from. We weaken the enemies just a bit. As such, we remove the need to make great decisions about the RPG mechanics while you’re still figuring out the basic rhythm. By the third song, we’ve introduced our first buffs, and then a second. This introduces the concepts both of how to select between spells and the value of selecting between them. We start introducing musical debuffs in the second region, and so forth. Once you’re in the second dungeon, all bets are off, and there’s still way more to introduce.

There is specific gear built just to reward super effective note-play. Those people are likely to do well on the leaderboards and in daily challenges. Moreover, some attacks vary in strength based on note play. There’s even gear that makes things harder, with debuffs, and note judgment, in exchange for greater powers! And then, of course, they’re likely to be raking in those points.

Oh man, we’ve been to so many conventions. Internal playtesting aside, we used friends and players of our past games. We went to four PAXs, two E3s, SXSW, Momocon, Gamescom, and on and on and on. Even so far into development now, I’ve never left a convention without pages of notes. Even when I think we’re “locked,” I refuse not to change things on a whim. Our QC team does not love me for this habit.

What has working on The Metronomicon taught you?

I think the biggest one is probably the constant effort it takes to keep our standard for quality high. It’s easy to get lax, and this team has been amazing at constantly pushing each other, at all stages of development. Reworking art as needed, rebalancing if its right and just adding more and more stuff. I keep adding hidden stuff, I know no one will ever see. I know for a fact, including before I went independent, this is the prettiest game that I’ve ever worked on.

All these amazing artists have decided to trust us with their tracks, to do with as we see fit. That’s a massive vote of confidence. I also, personally, think our game is super, duper fun. But…I may be biased.

Thank you so much for the opportunity to chat! I really appreciate it so, so much.

We thank Danny Garfield for talking about the development process on The Metronomicon.