My name is Alexander Kuvshinov, Creative Director at AuraLab and I am a thought leader, animator, artist, art director, and game designer.

I was inspired by cartoons like Zumbakamera’s Bendito Machine, Adventure Time and Codex Seraphinianus to name a few. It’s simplicity and philosophy that tug at my heartstrings, so I wanted to create something similar. When I created these characters in silhouette (although I didn’t silhouette them, I did highlight their eyes, lips, and mouth) there were no other games like them. We established an art direction before games like Limbo and World of Goo were released.

We explore and traverse the Astral World when we sleep. Our dreams can reach great lengths of incredible beauty. The vibrant colors can contain hidden senses of our subconscious. That’s where dreams come from. It’s bright.

The Evolution of Pip and the Creatures

About six years ago, I took part in a competition where we designed an iPad’s back cover. I drew teeth and eyes on the Apple logo. Based on the same principle, I drew lots of characters. Pip was one of them, and in one of the first concepts, Pip had to evolve and change superficially. With each incarnation, Pip was supposed to grow limbs and evolve. The horns represented choices that led to bad Karma; if he gained more horns, he found it difficult to live with the consequences. 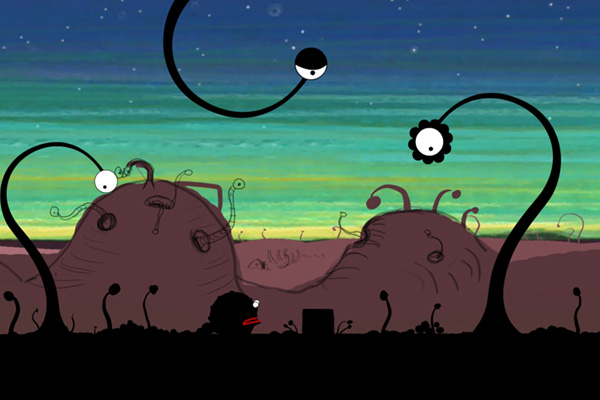 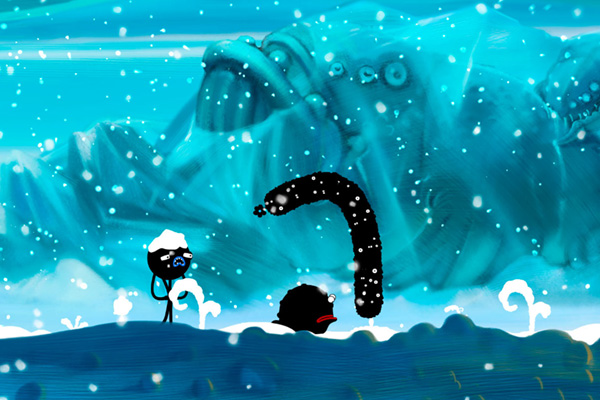 The most fun and most challenging process was applying the animation. During Karma’s development, we created 97% of the animation via Flash, 1% using After Effects and 2% using Unity. Breathing life into a character was cool.

The basic framework we used to create the creatures that left a lasting impression on the player:

In Karma, there was no interconnection between level creation and the plot. Although we could have created hundreds of thousands of level designs focusing on the plot, that would have meant an entirely different game, but with the same premise.

During development, we cut most elements. Before something made it into the game, we made different character and background versions. We chose the best ones and refined them. Then we play tested everything with players. If we saw a bubble, character or animation that wasn’t clear for the player or stirred the wrong emotions, we discarded those elements and redrew them after considering the experiences of the players.

Lots of creative ideas didn’t make the final cut. One of them was Pip accumulating fat because a nuclear winter began during the game. To survive, Pip became either experienced or fat. Eating other characters, he’d gain fat, but that spoiled his Karma. By helping other characters, he’d gain experience thus making his Karma better. The idea was one could complete the game with bad Karma by being fat and surviving the winter or being clever and surviving the winter. Pip being stupid and thin wouldn’t survive and wouldn’t evolve. That was one of the many ideas we had.

While many other developers focused on the result, I enjoyed the creation process of Karma Incarnation1. I felt sad being restricted by deadlines since I’m an artist. I wanted more time to devise, create, draw and animate. I wanted to make a hundred thousand interactive elements and sounds within the game, but when you realized your creative process involved ten other people and you had to go back to the beginning, you left all these new ideas behind. End of story. Instead of making ten different fully interactive elements you might make only make one.

It was the best work I’ve done in my life so far. I’m proud of every pixel. But mostly I’m proud of our whole team! These beautiful people are the reason why this game enters the world.

We thank AuraLab for giving us the opportunity to discuss the development behind Karma. Incarnation 1