join our newsletter
Hitman (2016) A World of Opportunity
author Phillip Ash | February 3, 2017
Hitman (2016) is one of my favourite games of this year. I have always loved stealth games, and the Hitman franchise has always had its unique take on the genre. Hitman (2016) in my opinion represents the best the series has had to offer to date. I do not hate Hitman: Absolution (2012) as many do, but to me, it represents a different direction for the series, a different philosophy of play. Hitman (2016) serves as an evolution of the franchise's design philosophy in a modern market.

The Game Design Philosophy of Hitman (2016)

The Hitman series has almost always followed the same philosophy of player freedom, influence and exploration. The designers of Hitman aim to provide the player with a sandbox and allow them to influence the happenings within it. In Hitman (2016) we are given levels that are both larger in scale and density than in any previous games. The levels provide much more free roam potential than in previous games, this is important due to the game’s emphasis on exploration and learning the level. Individual NPCs roam around the level on set paths interacting with each other. In many cases, these AI paths can be manipulated by the player to get them where they would like them to be. It is this idea of watching and learning, trial and error that is essential to the philosophy of Hitman, yet this is also what causes the franchise to be less accessible and have a smaller appeal than many AAA publishers would like. The process of starting a new level can be daunting and even frustrating as you are disempowered due to the lack of knowledge of this new environment.

The designers succeed in their goal to give the player countless options regarding assassinating their targets. They emphasise the scripted options in each level by providing challenges regarding these options. This is all key to the experience, as Hitman (2016) does not provide the player with a large number of levels and instead gives the players countless ways to play the level and encourage those levels to be repeated over and over again. A clever design decision and one indies could use to keep asset budgets down, although it takes some articulate design skills and is a delicate balance to maintain.

This process of repeating levels is the core of the game design philosophy. Mastery is always the goal, Hitman (2016) is not for the casual player, those who attempt to play it casually will find a more short, shallow and unfulfilling experience. Every time the player learns something new they are empowered, whether it is a new pathway into an area, a new spot to get a disguise, a new way to kill a target, etc. This experience of learning is what keeps the player coming back and wanting to repeat the level. The process is further realised as you unlock new tools and locations to start with, both from the current and other levels. This encourages the player to move in between levels in some cases, keeping the experience fresh.

Accessibility has always been a tough issue in Hitman games. The first few games were notably difficult and punishing. When stepping into a new level, an unknown environment, the learning curve is something of a wall. The player has to accept the powerless feeling again and concede to trial and error, restarting the level over and over.

In Hitman (2016), the new mechanic to help accessibility is “Opportunities”. Opportunities serve as quests within the level which provide the player with an opportunity to in most cases, kill a target. Opportunities give the player waypoints from objective to objective until the opportunity is complete. Initially, a veteran Hitman player would think that this defeats the purpose of Hitman as it harms the need to explore the game, almost removing it entirely. I thought this too initially, but as you delve deeper into the game, you learn that the goal of Hitman (2016) is not to beat a level, it’s to master a level. Having a few of the possible solutions to the assassination puzzle given to you does very little toward achieving this goal. In fact, being guided through the level, a few times gives the player a good jumping off point to learning the level.

The Episodic Model And Level Design

Hitman (2016) is the first Hitman game to use the episodic model. I played it when all five episodes were out, but I feel as if I missed out something special by doing so. The episodic model works very well for Hitman (2016) due to the design philosophy behind it. The emphasis replayability allows the player to get more out of a single episode than other episodic titles, such as most Telltale game titles.

It is this very business model that allows the designer’s freedom to create such dense levels. Players would not have taken well to the fact the game only has five main levels with a few extra from DLC, but releasing each level slowly gave players time to appreciate the scope and possibilities of each level.

The designers use the episodic model along with the backlog of mechanics and design tools available to them from the Hitman series to create their replayable sandbox playgrounds. The two biggest points at play here are the challenge system introduced in Hitman: Absolution (2012) and the level design philosophy of Hitman: Blood Money (2006). The challenge mechanic was an interesting addition, and while not fully utilised, it gave players a reason to replay a level other than achieving a silent assassin rating. It also served to give the player an idea of all the options available. On the other hand, the level design of Hitman: Blood Money (2006) was hailed as one of the best of its time, large open sandboxes that previously may not have even been possible based on technology.

In Hitman (2016), the designers went back to the level design philosophy of Hitman: Blood Money (2006), yet used and improved the challenge system of Hitman: Absolution (2012). The open area sandboxes ended up being a much better home to the challenge mechanic. You explore open areas looking for new ways to take out your targets, replaying the level to complete the challenges. The episodic model, along with these two design choices, create a system where all players are encouraged to play like a completionist.

The elusive target system is a new edition to the series which enhances the episodic business model. Every few weeks, a new target is released, and every player has the chance to assassinate them for rewards. The catch is that they can only be killed once and if the player dies they cannot retry the level. This mechanic demonstrates how effective the levels are at providing numerous options. By just adding one new element in the way of an NPC target, the designers have effectively created a new mission, using an already built level. This is a great use of assets and design, allowing players to use their knowledge of a level in a new way. 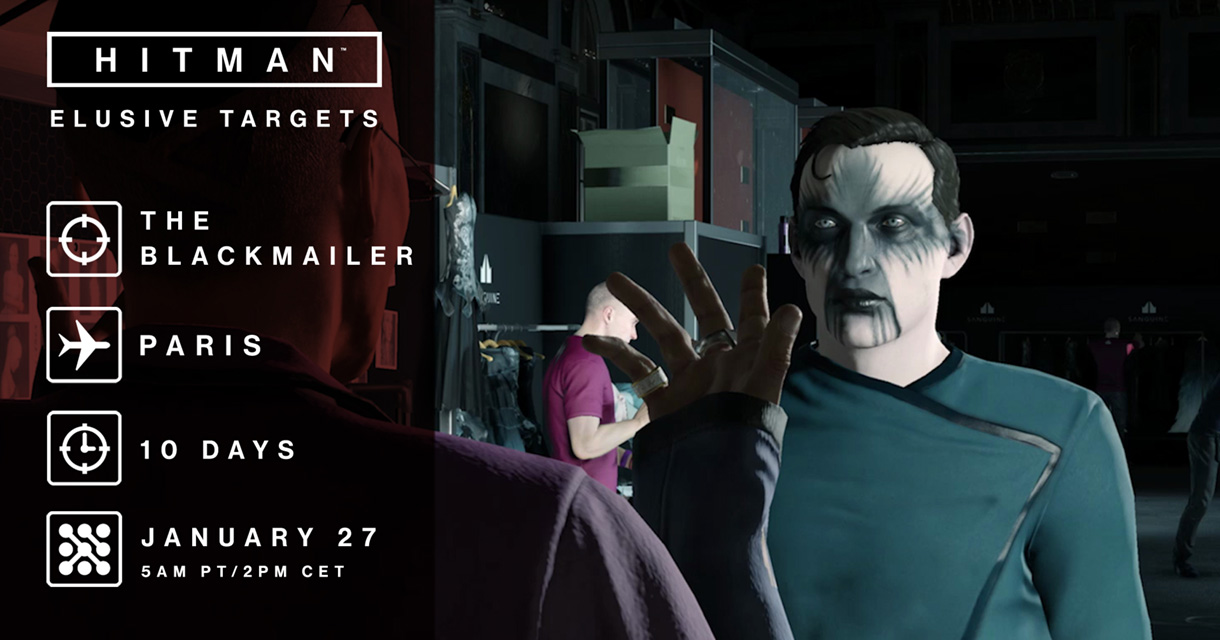 Community is important for any game, but for Hitman (2016) it’s a focus. The continuation of the contracts system from Hitman: Absolution (2012) and the new elusive target system has created a vibrant community. The support of these two systems creates a scenario where every few weeks the Hitman Reddit is live with a thread of how to complete the latest featured contract or elusive target. YouTube videos have also become an essential part of providing walkthroughs for the one time only elusive target missions. Additionally, streamers have become a vital part of the game’s biggest fans learning the levels. The episodic business model is partially responsible for this boost in the community, keeping it strong for over six months now. It shows that the developers looked carefully at the market climate and took advantage of the rise of YouTube, Reddit and streaming culture by creating a community driven Hitman game.

Hitman (2016) is an excellent example of developing sequels through improving on one’s design philosophy while adapting to new market climate. The developers at IO Interactive show us ways we can create community driven games through making use of the episodic business model in a world where games are constantly updated, and players are more than happy to play it publicly through streaming or YouTube. The game also serves as an excellent example of sandbox level design and the reuse of assets to save time and budget, both great lessons for indie developers.

Phillip Ash is the reigning Commander in Chief of Third Comma. A dedicated game designer, consultant and industry expert, follow him on Twitter @RealPhillipAsh

We write about game design and industry analysis, as well updates on our own games in production. Check out our site www.thirdcommagames.com and follow us across Facebook and Twitter for updates and releases of all future posts and news.

This post was written by an independent contributor and does not represent the opinion of Eye For Games.