Pandemonium!: A Wizard and a Court Jester

Pandemonium! was a 2.5D platform game developed by Toys for Bob and published by Crystal Dynamics on PlayStation, Sega Saturn, and PC in 1996. It’s a title that not many remember since games like Klonoa and Crash Bandicoot soared in popularity. The premise was simple. Nikki and Fargus, along with his stick puppet, Sid, snatched a mystical spell book and began toying around with different spells. But when Fargus and Sid pressured Nikki into casting a powerful spell, ‘10th level spell’, a monster named Yungo emerged from a portal and consumed a whole kingdom. The trio was on a quest to find the Wishing Engine to undo the spell and save the kingdom.

What in the World?

The level select map had significant changes from its Alpha build to the final version of Pandemonium! In the Alpha build, characters were placed on a grid with numbers representing the levels. Players were given the option to choose which level to start. In fact, players were able to lose a life by falling off the edge of the map. In the final version, a visual indicator represented the level (typically a landmark from the level) that popped up once the player ran over the section. The player had to complete a level to progress to the next. 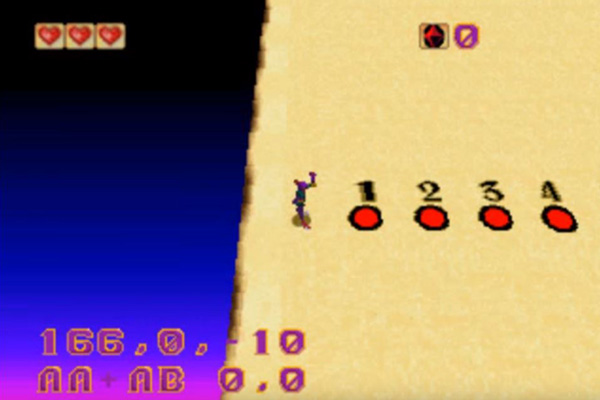 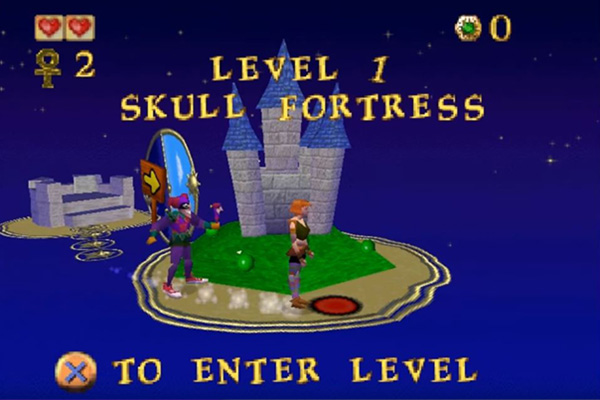 Collectibles were also different in the Alpha build of the game. Collectibles were represented by ruby gems while the final build contained a variety of jewels (green or red jewels). Magical spells, represented as Stars in the Alpha build, rewarded the player with a random spell, while the final version indicated what spell was available in the level (pink, blue, green). Players increased their Heart containers by collecting some ruby gems in a level, which made the game easier than the final build. Players were rewarded with an increased Heart container after defeating a Boss in the final version. 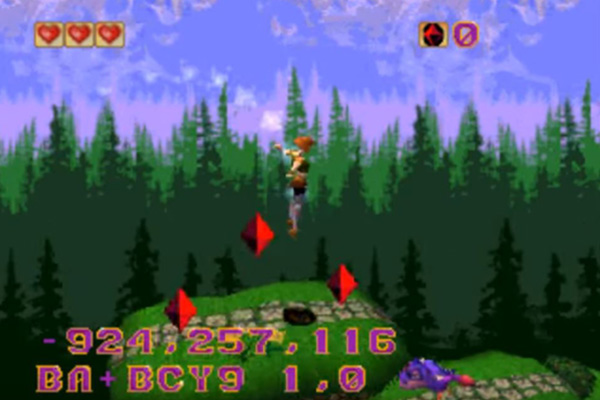 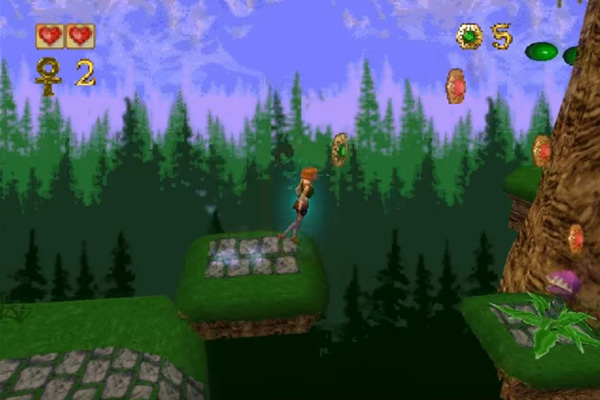 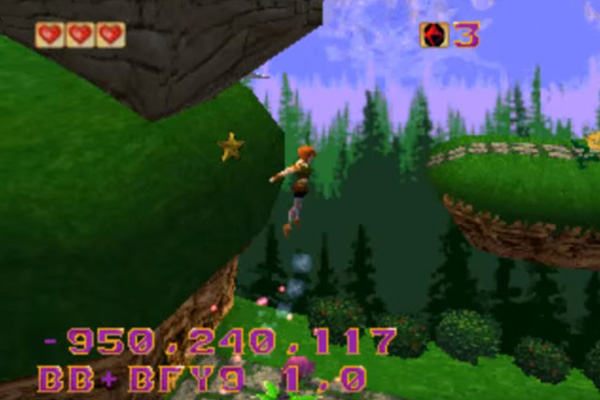 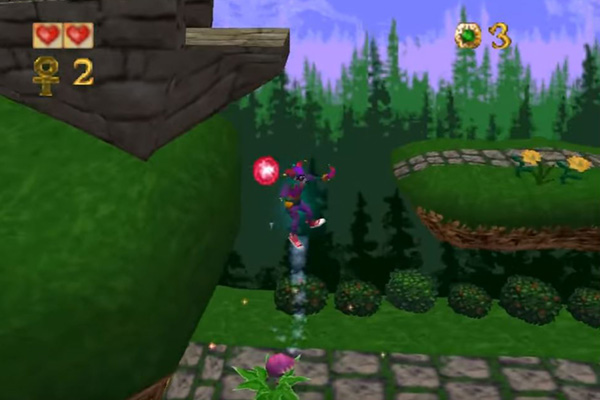 Pandemonium!’s HUD went through multiple redesigns during its development. Taken from an early E3 1996 teaser trailer, a portrait of Fargus along with the Hearts, ruby collectibles, and Lives were represented to the player. In the final build, the HUD was significantly simplified. Presumably, this was done to prevent certain obstacles and platforms in the level from being obscured by the HUD. 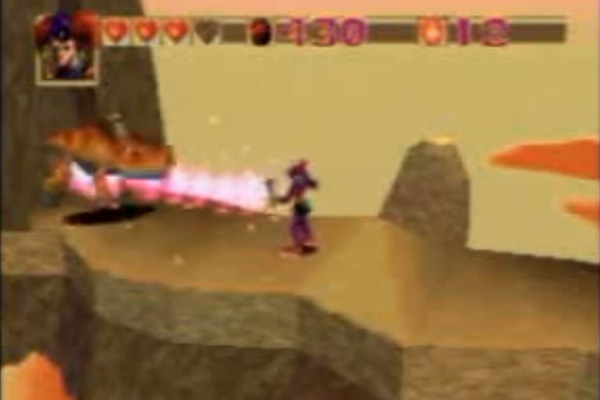 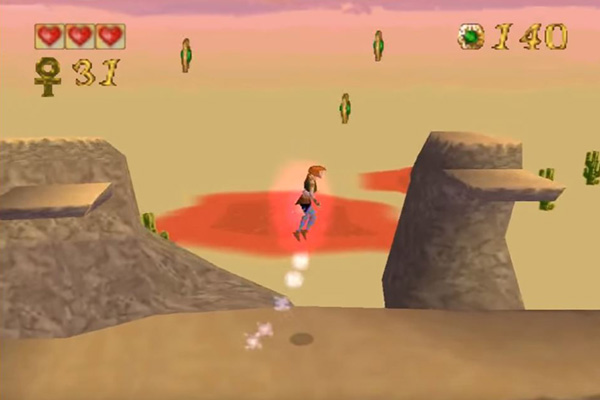 On the second stage, The Hollow Stairway, some enemies were redesigned. In the alpha build, a lime green creature with two arms protruding from its sides was replaced with a smaller purple creature in the final build.

In the final build, the flying mutant-bat creature was redesigned. In the alpha build, the mutant bat was significantly larger; in the final version, the bat was reduced. This was presumably done to add more challenge to the game. The smaller bat has a smaller hit-box than the larger bat making timing and jumping on or over the bat more difficult. 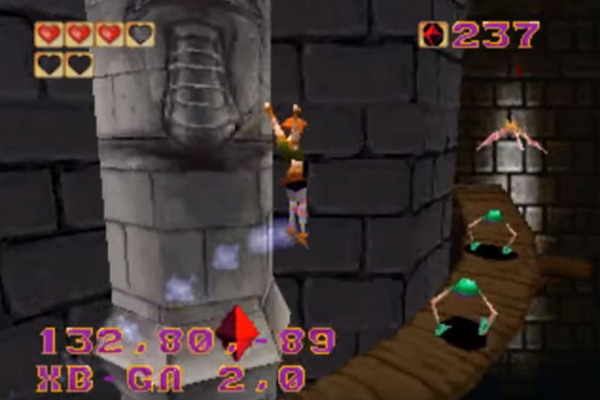 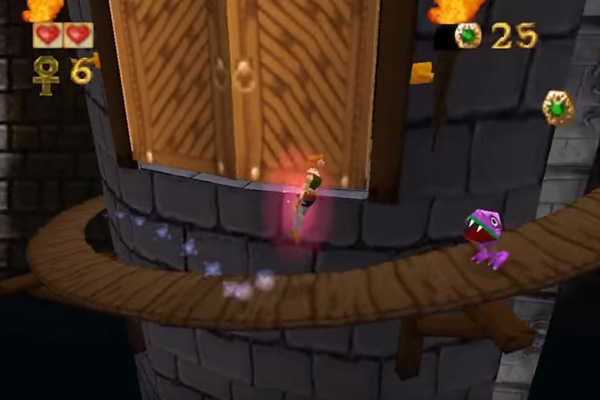 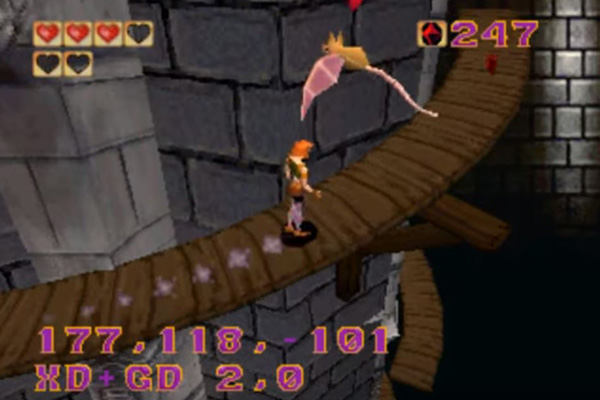 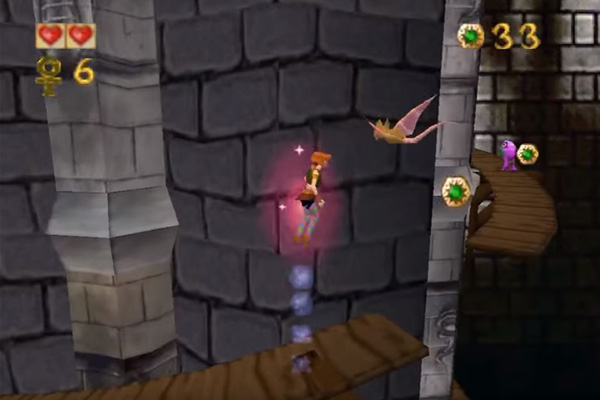 Concept art of incredible detail was shown in a French gaming magazine, Joypad issue 58 that resembled the sixth level, Acid Pools and the end of the first level, Skull Fortress Caves. 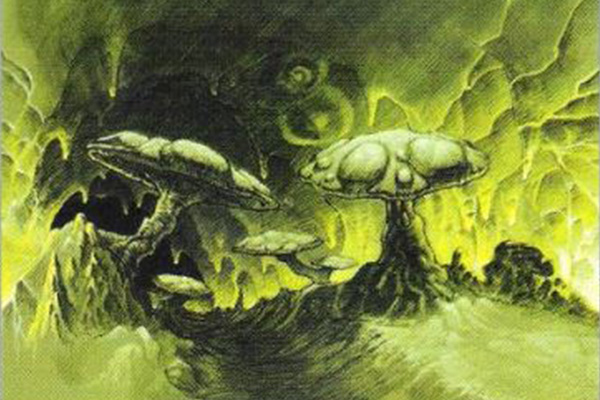 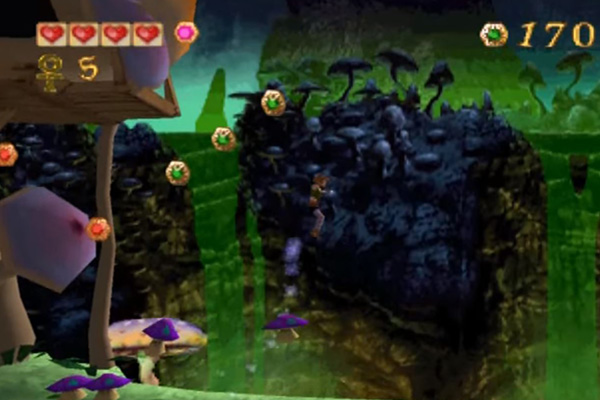 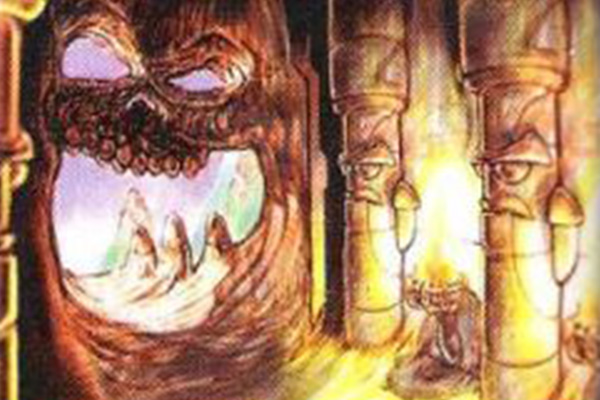 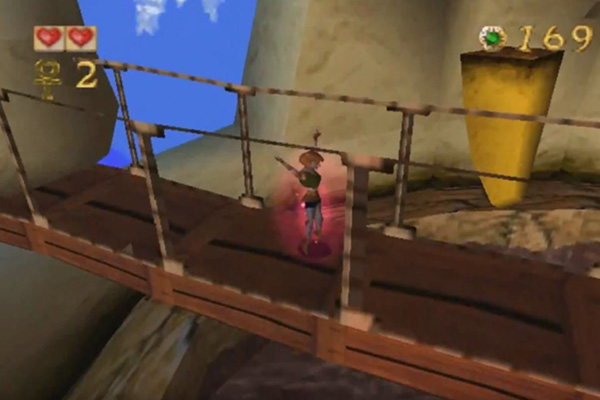 Various gaming publications promoting the development of Pandemonium! reported players could swap between Fargus and Nikki on the fly during a level. If a player selected Nikki and progressed through the level but had trouble encountering an enemy or boss, with a push of a button Nikki disappeared and Fargus emerged. What was interesting about this mechanic was it wasn’t entirely scrapped. In fact, upon entering the password: BODYSWAP on the main menu, the player was able to switch between our heroes at any time during a level. The reason why the developers decided not to have this feature playable without entering a code is unknown. Although the game runs rather slower with the code activated. Peculiar…

Magical Hoppers: A Princess and a Wacky Superhero

When Pandemonium! released in the US and Europe, Bandai saw an opportunity to bring the game to Japanese gamers. However, certain things had to be changed for the game to appeal to their audience. Our heroes, once known as Nikki and Fargus were now Guppy, a princess, and Cram, a superhero. Bandai completely redesigned the characters and their appearances from scratch and retitled Pandemonium! as Magical Hoppers. What made Magical Hoppers unique, and in some ways special, was the incredible CGI cinematics from Pandemonium! were replaced with incredibly detailed anime sequences that told a completely different story. In fact, the Sega Saturn opening sequence was different from the PlayStation sequence. 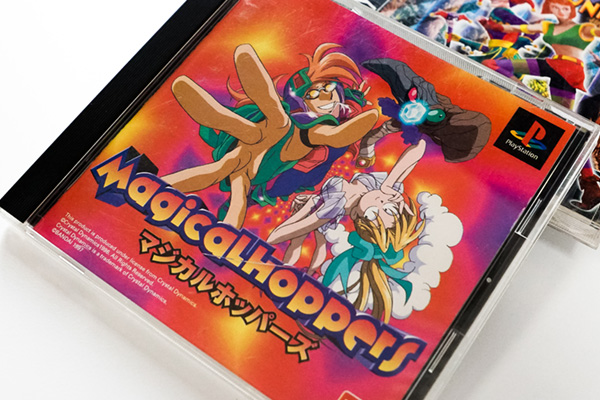 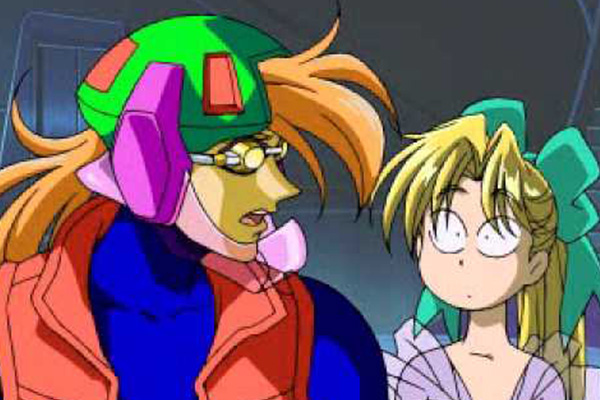 It’s a Magical yet unchanged World

The menu screens for both games remained relatively the same with the exception of the titles and the characters. Fargus’ idle animation from Pandemonium! was scrapped entirely in Magical Hoppers. Cram instead stands idly by and turns his head from time to time. However, Nikki’s idle animation from Pandemonium was preserved for Guppy in Magical Hoppers. The copyright and trademark information at the bottom of the menu screen was also different. 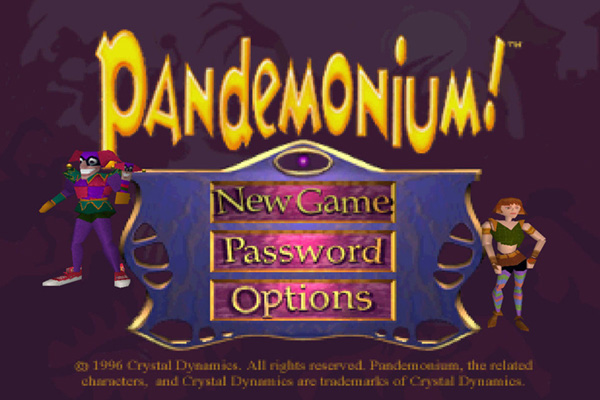 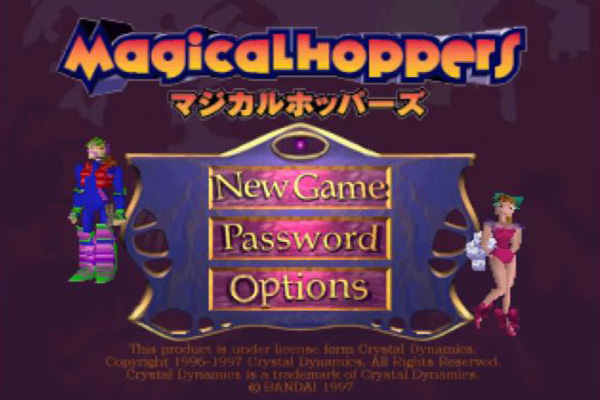 Despite the name change, the characters’ drastically different designs and storylines, the levels and enemies remained unchanged. Although Magical Hopper’s cutscenes and its contents are in Japanese, the game itself is entirely in English. In fact, the bosses who taunt our heroes in Magical Hoppers still have their unique English voice overs from Pandemonium! Perhaps it was an oversight by Bandai. 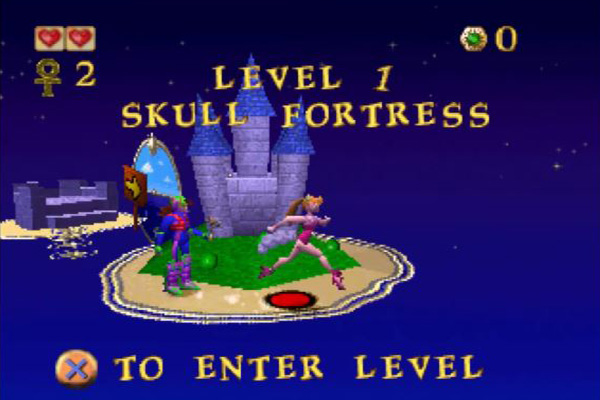 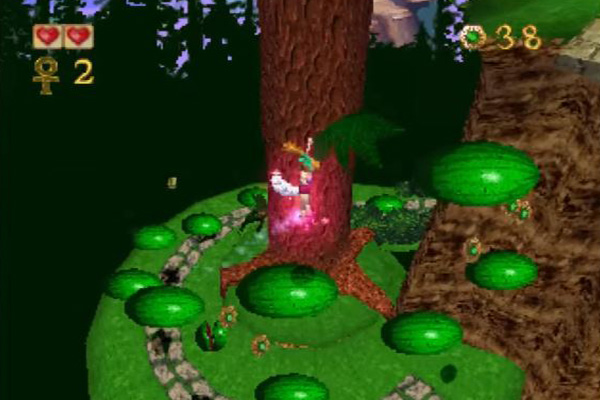 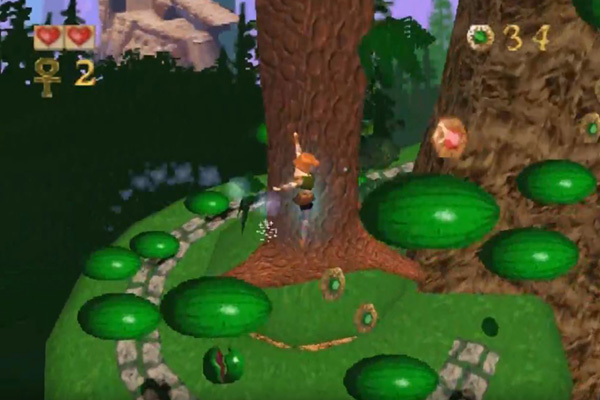 You Gain Some, You Lose Some

Although the levels and enemies remained the same, character abilities were different. Especially for Fargus’ Japanese counterpart, Cram. In Pandemonium!, Fargus’ abilities were unique. He had a rolling cartwheel melee attack that obliterated the enemy in one fell swoop. The hit-box for Fargus’ cartwheel attack was large. Meanwhile, Cram’s melee attack was a forward roll with less hit-box range making it more difficult to defeat enemies in a level. Guppy’s animations and abilities remained the same as Nikki. She still had the ability to double jump across platforms and had a much faster run speed. The magical spells for both characters remained the same. 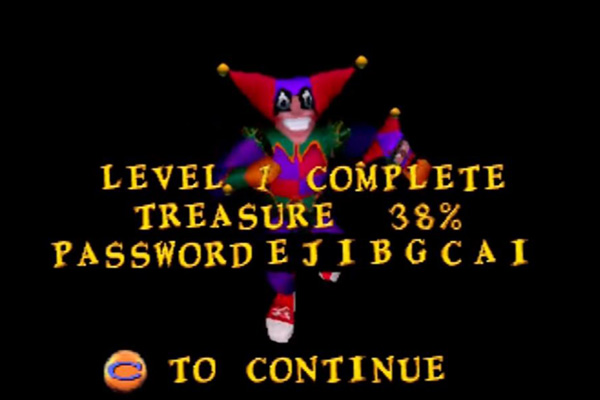 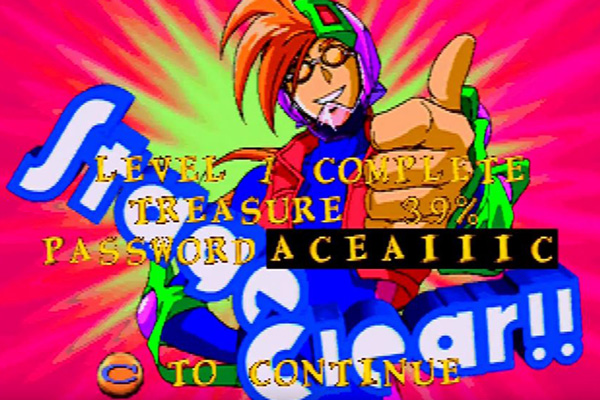 Magical spells, the thrills and spills of adventure in vast worlds adding a whole other dimension to the experience, it’s insanity! No, it’s Pandemonium!

Pictures taken by the EFG Staff.